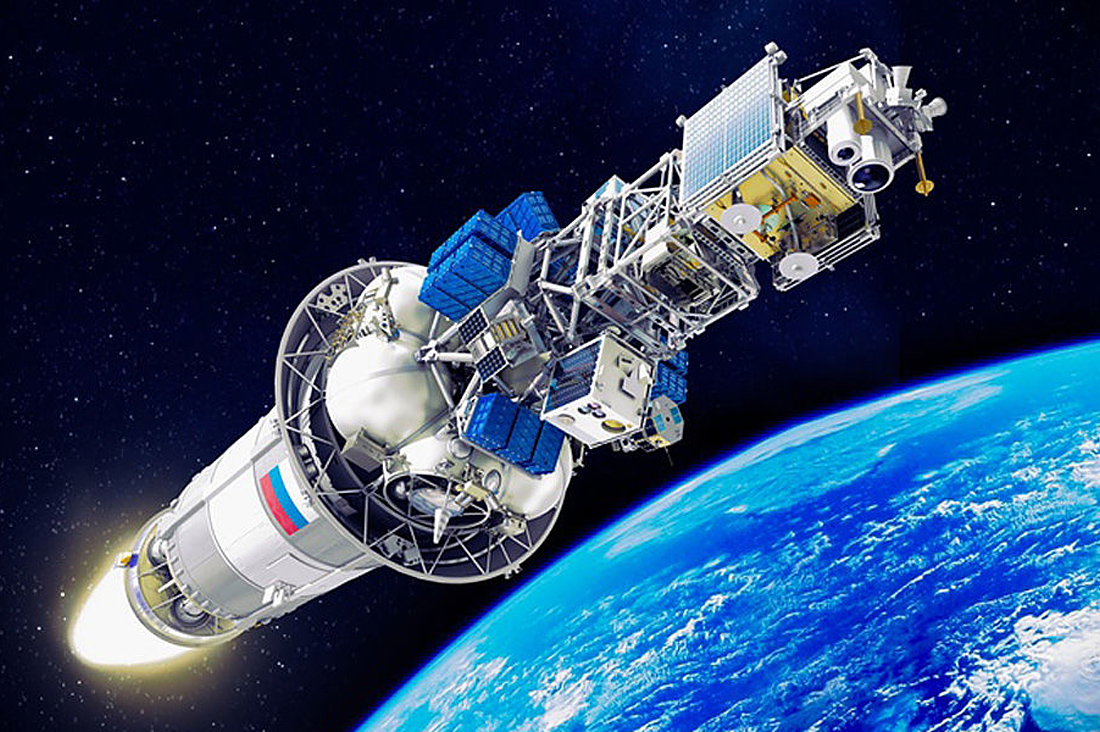 On July 14, the Soyuz-2.1a rocket will be launched with a record cargo for the Russian space program: 73 satellites. The main load of the rocket is a satellite for the shooting of the Earth "Canopus-V-IK". As a passing - a whole bundle of small vehicles. I'll tell you about the most interesting for me.

Kanopus-V-IK is not the first device of the series produced by the VNIIEM corporation in Moscow in cooperation with the British company SSTL. For nearly five years, two twin satellites have been flying in orbit: the Russian Kanopus-V and the Belarusian KSA. In 2016, the Lomonosov scientific satellite, built on the same satellite platform, flew from Vostochny. 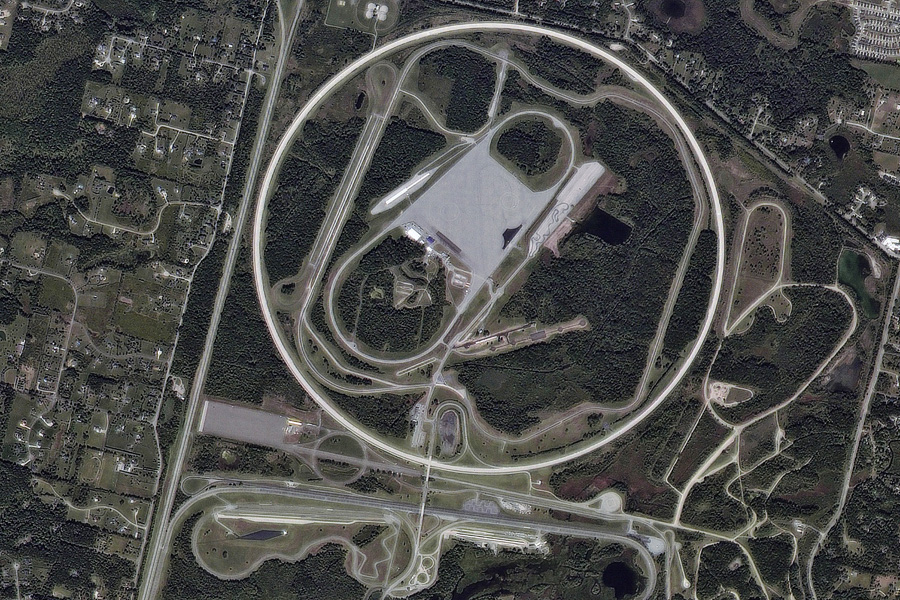 Lomonosov is studying the Universe, cosmic radiation and near-Earth space. It is unknown how successful he is studying - scientists have been silent for a whole year as partisans , following the long tradition of public relations in Russian science. From unofficial sources it is only known that systems and devices work normally.

From the predecessors "Kanopus-V-IC" differs in payload, which influenced its name. The satellite is equipped with an additional camera that removes an infrared spectrum in the middle and long range, which should see the center of ignition of a forest fire with an area of ​​more than 5x5 m and cover the 2,000 km wide strip with one glance. The camera of the visible range should shoot with a resolution of 2 m in black and white (panchromatic) mode, 10 m in color (multispectral) from a height of 510 km.

The satellite has a mass of about 600 kg, and is launched by a rocket, which can bring about 4 tons to this orbit. Therefore, it is not surprising that Roskosmos has tried to collect as much of the associated load as possible for this launch. 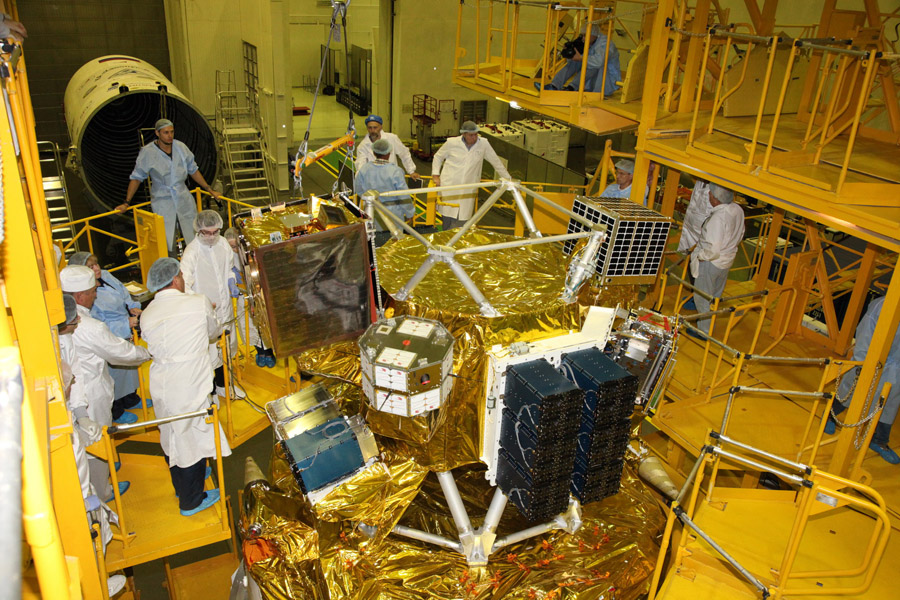 For the Roscosmos itself, this launch is interesting as a demonstration of the Soyuz’s commercial opportunities in the global launch market for small satellites. Earlier in this market, one of the leaders was the Russian-Ukrainian company Kosmotras, which launched dozens of foreign satellites with the conversion Soviet ballistic missile Dnepr from the cosmodrome (and essentially the Strategic Missile Forces) Yasniy in the Orenburg region. In 2014, a record launch of 36 satellites with one rocket took place and it was only in 2017 that the Indians beat.

Roskosmos itself, through its division Glavkosmos, also dealt with commercial launches of small foreign travel, but the number of these contracts was more modest. Now the Dnipro project has practically died due to a political aggravation between Russia and Ukraine. Therefore, Glavkosmos was merged with Kosmotras in order to use the capabilities of the Soyuz and the commercial experience of Kosmotras. The task of such cooperation is to load the Vostochny cosmodrome with work.

Start July 14 is a demonstration of the capabilities of “Glavkosmos”. The “ Frigate ” overclocking unit is to dissolve the satellites into three different orbits 510, 585 and 600 km high, producing several engine starts, and then self-merging into the Earth’s atmosphere over the ocean.

Most of the associated load is foreign, there are satellites of Germany, Norway, Japan, Canada. Weight is from 1 to 120 kg. 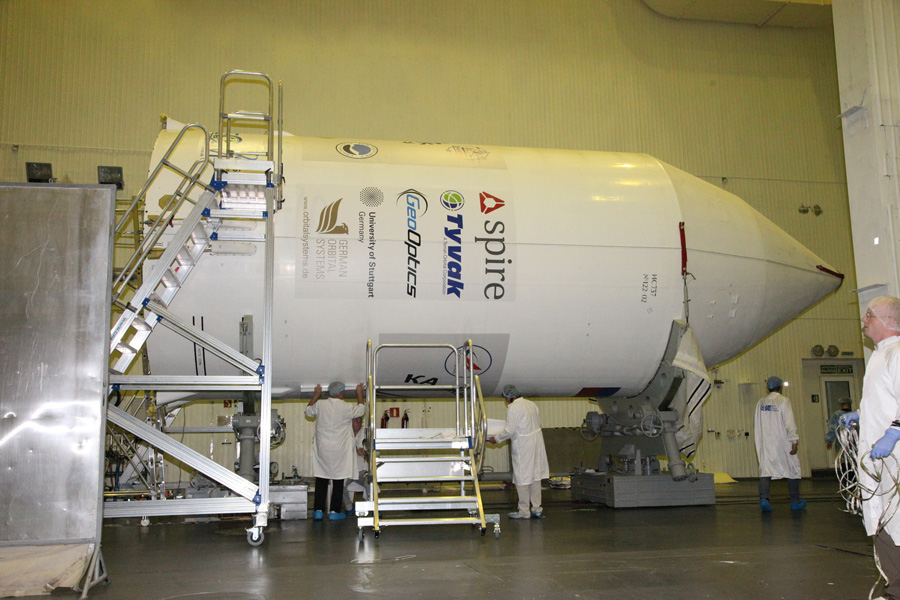 48 nano-devices belong to the American company Planet , which already has more than a hundred satellites in orbit, and does not intend to dwell on this number. Their business idea is to create a daily updated service similar to the Google map. Now they have significantly advanced to this goal, and launched the service in test mode.

There is more than one Russian satellite flying on this rocket. In addition to the "Canopus-V-IC" there are five domestic devices, and three of them cause me special feelings. 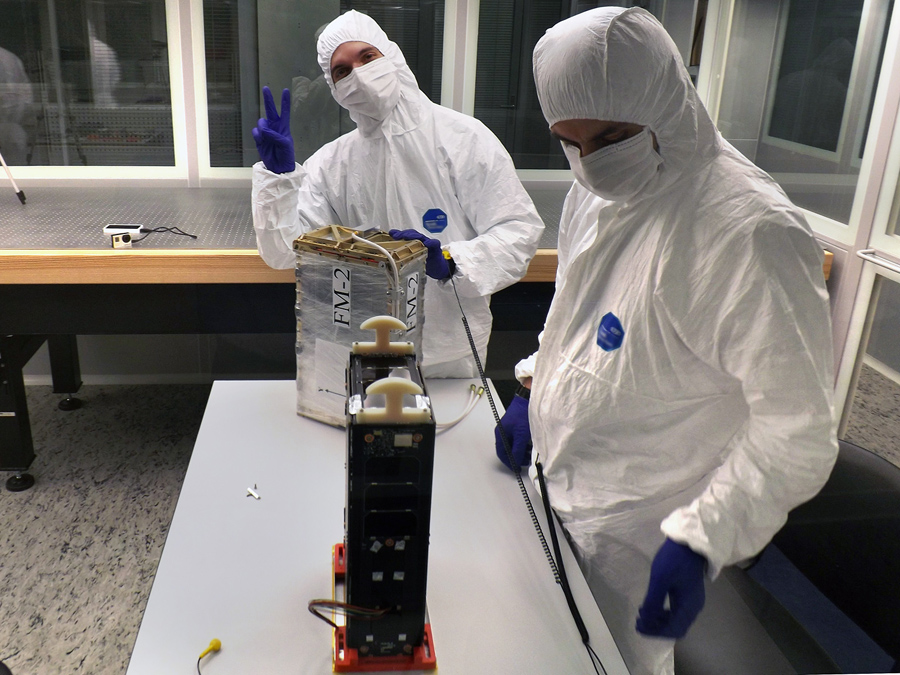 And one "Mayak", which appeared as a public project on the initiative of the enthusiast and engineer Alexander Shaenko, with the support of the Moscow Polytech. 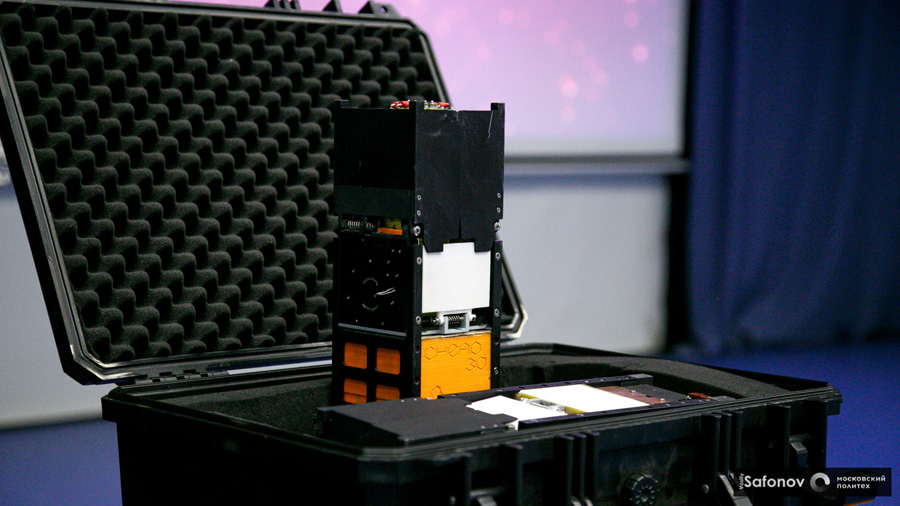 The company "Dauria Aerospace" appeared almost then as Planet, and also took up the development of nanosatellites for shooting the Earth. But companies developed in different ways. Planet focused on the development and multiple upgrades of its platform in the standard CubeSat 3U. Dauria began to develop several directions at once, including communications satellites and even interplanetary projects.

The result of the first years of the work of Dauria Aerospace engineers was a pair of state-owned satellites MCA-N in the CubeSat 6U standard. For Roskosmos this order is more experimental. The state wants to understand how realistic it is to create an application spacecraft that can fit in a schoolbag. At the same time, the fundamental possibility of Russian private owners to create serious space products is estimated. All ground tests, which our children passed for “adult” state apparatus, passed, space testing remained. 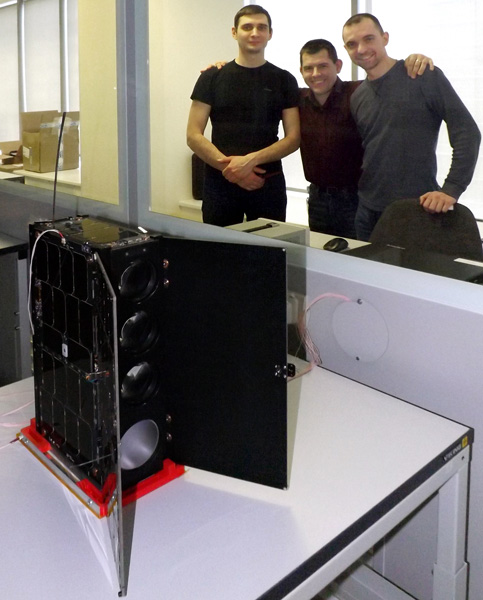 For Dauria, ICA-N is not just an experiment. These are finished products based on a proven platform. Satellite payloads must provide commercially useful information on an industrial scale. The satellites are equipped with a multispectral camera for imaging the Earth at a resolution of 22 meters, a radio link with a data transfer rate of up to 40 Mbit / s, a triaxial orientation system, and a star sensor. 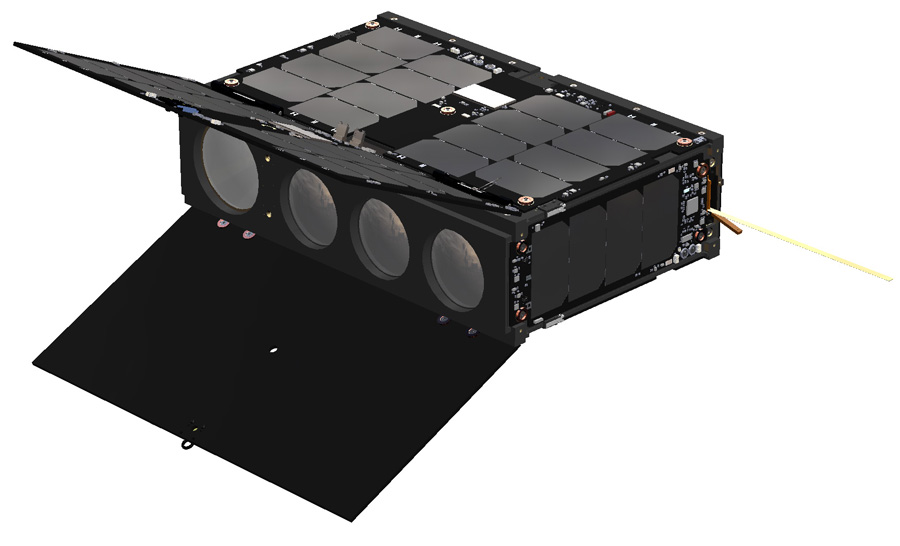 I expected this launch more than two years. I worry, as if I was my own, although I was trusted only to photograph them from a safe distance. 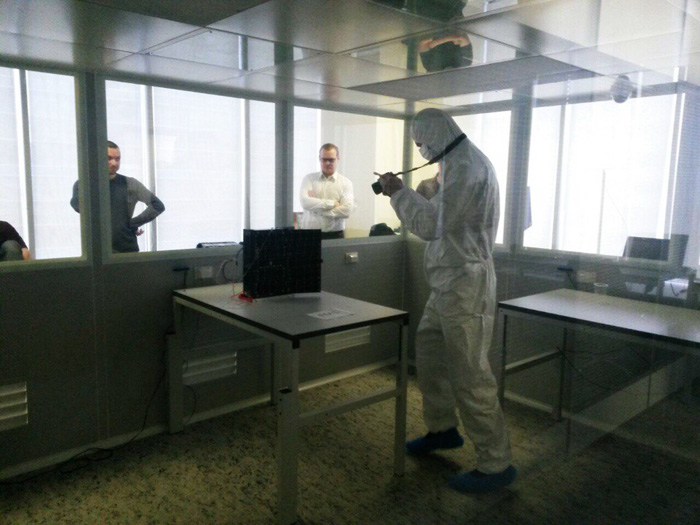 There is a sense of involvement in the "Beacon". The idea of ​​the project of the simplest satellite "Mayak" arose during a meeting of the community " Your Sector of Space ", which was organized by a space engineer, at that time an employee of "Dauria", and even earlier a participant in the project " Selenohod ", Alexander Shaenko . Subsequently, he completely went into teaching and publicizing activities, working on his companion. The idea: by the forces of enthusiasts to assemble and launch a spacecraft. At first they intended to create an analogue of the first satellite, so that it flew and sent a "beep-beep-beep" in the radio band, but then they decided to make it even easier. Thus arose the idea of ​​a satellite-man-made star, with a deployed reflector. 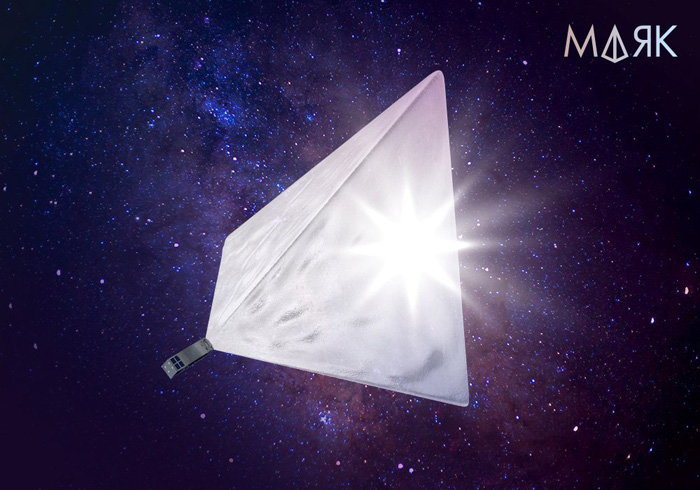 For the development of the satellite, funds were raised twice on a boomstarter , in total they collected about 2.4 million rubles. With this money we managed to collect the design and conduct some tests. The project was supported by the Moscow Polytechnic Institute (MAMI), which provided a laboratory and attracted students to project activities. Glavkosmos supported him as an institute satellite and offered to launch it for free. Together we managed to prepare the “satellite-star” for the launch.

The spacecraft has a battery pack and control electronics, a reflector deployment mechanism, and a tight bundle of shiny mylar film. All this is enclosed in a standard CubeSat 3U. After separation, the satellite must deploy a three-meter reflector in the form of a triangular pyramid.

True, the question of the actual appearance of this star remains unclear. Probably, under favorable conditions, in a clear evening or night sky, it will work, but it is unlikely that it will become the “brightest star”, as the developers initially promised. According to calculations, the satellite flies only about a month, but will quickly lose altitude due to atmospheric braking and will burn in the atmosphere.

July 14 is an important day for dozens of engineers, scientists, students, businessmen and space enthusiasts around the world. They will send antennas to the sky, twist the tuning knobs of radio receivers, watch with binoculars on the balconies in the hope of hearing only their telemetry squeak, to see the brilliance of only their “stars”. And when this happens, the cosmos will become a little closer.