I changed women, trams like gloves
And drank terryam-terryam, three stars of brandy ...

Previously, with the selection of gloves for domestic work and repair problems were: either a canvas tops, or one of the two. Now, in the building hypermarket, the glove compartment occupies a large area, and when you look at the shelves, your eyes simply run up. How to understand a considerable amount of articles knitted, leather and rubber products on hand? This article is dedicated to.

So, what we will choose from gloves. Most people have the first thought that arises when we start choosing - how much I am ready to give money. Especially this thought drills the brain when there are products with large three-digit or even four-digit numbers. From the point of view of the family budget, the idea is, in general, quite sound, but not quite: apart from the “price” parameter, many do not see another important parameter - “security”, but it is present, and in full growth. And the situation with the amount you can pay for gloves fits well into the fabric of a wise anecdote about family life: “Do you want to be right or happy during an argument with your wife?” So here, health and convenience when choosing gloves directly correlates with money, with whom you break up in the store. Here is a dialectic.

Materials used in the manufacture of gloves

Cotton thread used for knitted knit gloves. The density of the material is governed by the number of threads and the class of knitting. The greater the class of mating, the smaller the cell between the threads, respectively, the fabric is less susceptible to dispersion, i.e. sprawling fabric threads on the area. The main classes of knitting - 7 (yarn with 6 threads); 7.5 (yarn 4-6 threads); 10 (3-5 threads).
Mainly in construction hypermarkets, 7th grade gloves are sold.

In the industrial manufacture of gloves, leather is not used entirely in pieces, since the skin of cattle and pig skin reaches 6-7mm, only armor can be made of such leather. Leather sheets undergo lamination (imitation), i.e. the sheet is cut in thickness into several layers (from 3 to 6, depending on the thickness of the skin). The first layer, facial, called measurey, in fact, represents what we call skin, it is of the highest quality and most expensive. The following layers are called the split, the farther from the face layer the split was cut off, the worse it is in quality, as it is more loose.

Aqueous dispersion of natural or artificial rubber. When vulcanization turns into rubber. With all the known virtues, it has the unpleasant property of causing allergies in people sensitive to latex.

An artificial polymer film with a cross-linking intermolecular oil-based bond — there will now be buzzwords — formed by copolymerizing butadiene and acrylonitrile. Nitrile forms a much more reliable barrier protection against chemicals, compared with natural latex. Also, its puncture resistance is much greater than that of latex and other films used to make gloves. Tensile strength is also significantly higher than latex. But he is tougher than latex.

Artificial polymer chlorbutadiene, a film with a transverse intermolecular bond on the basis of oil, it is also called foamed rubber. Unlike the nitrile, which is more rigid, the neoprene module (the force that you want to apply for stretching gloves) approaches the module value of natural latex, therefore, neoprene products are very convenient, even when used for an extended period of time.

Polyvinyl chloride (PVC) or vinyl is created by polymerizing vinyl chloride monomer, and various plasticizers are added to improve properties. An inexpensive alternative to nitrile and neoprene. Performance characteristics of vinyl products, as a rule, below. Also, although vinyl is not allergenic, various types of plasticizers used can cause skin irritation.

He also Twaron, he also para-aramid fiber (polyparaphenylene-terephthalamide). Known material for the manufacture of tires, cable reinforcement, acoustic diffusers and reinforcement of composite materials. Well, for body armor, of course. Gloves from it turns out resistant to cuts, abrasive abrasion and to high temperatures. 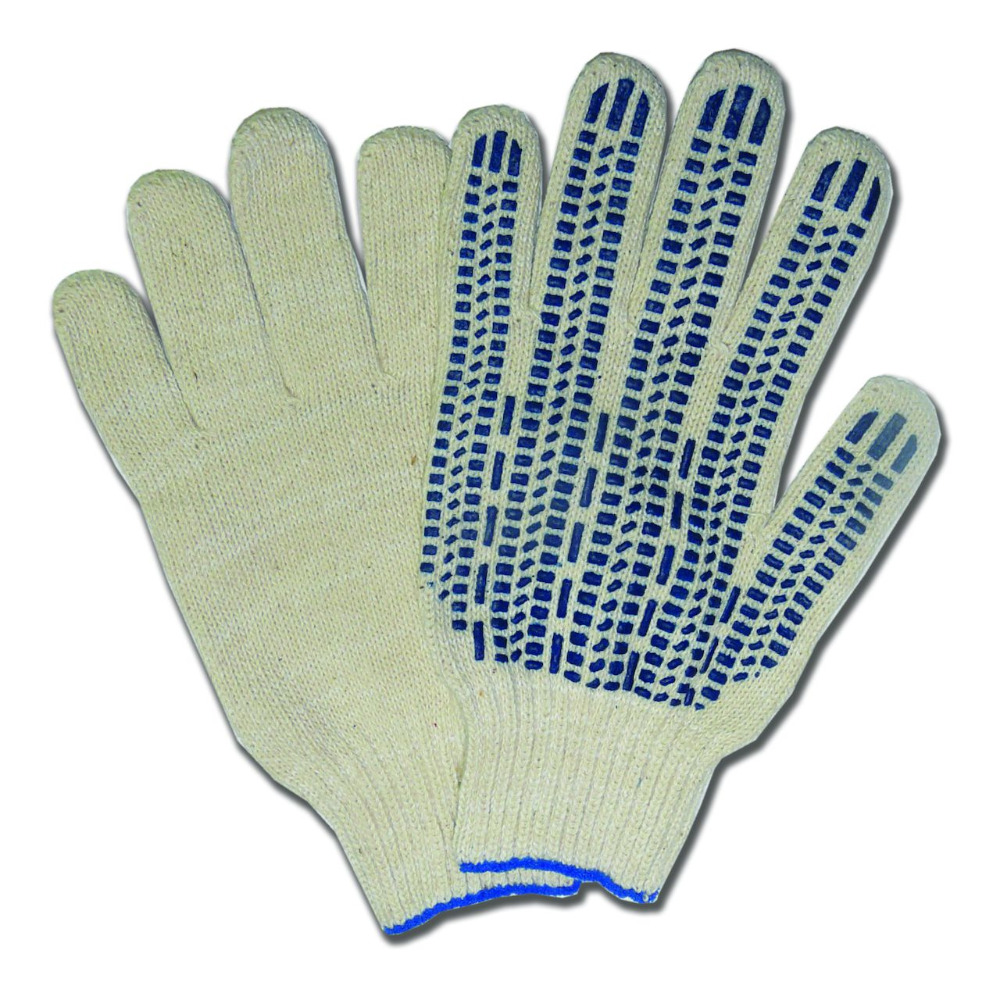 All saw them and all used them. The most budget in the market, however, the price range is quite large, it happens, 5, and sometimes, 50 rubles. The difference is due to the fact that all other things being equal, the price of such gloves depends on the density of the knitting and the processing of the edges. What good can be said about such gloves? Nothing. They do not protect against sharp edges and especially splinters; they get wet instantly. Moreover, these gloves have a nasty feature to cling to the threads of the screws when working with a screwdriver, with subsequent tightening of the palm to the rotating chuck, and, by the way, the effort of even a weak screwdriver (60 Nm) is enough to break a finger, and even more than one, as traumatologists say.

The only justified use of such gloves is to move something dirty dry in cool weather, then throw it away.

Here in such gloves, you can and dirty-wet shabby, and small splinters do not break through the polymer coating. Watering gloves cover both with nitrile (fairly tough) and latex, often corrugated (softer, but also less mechanical). 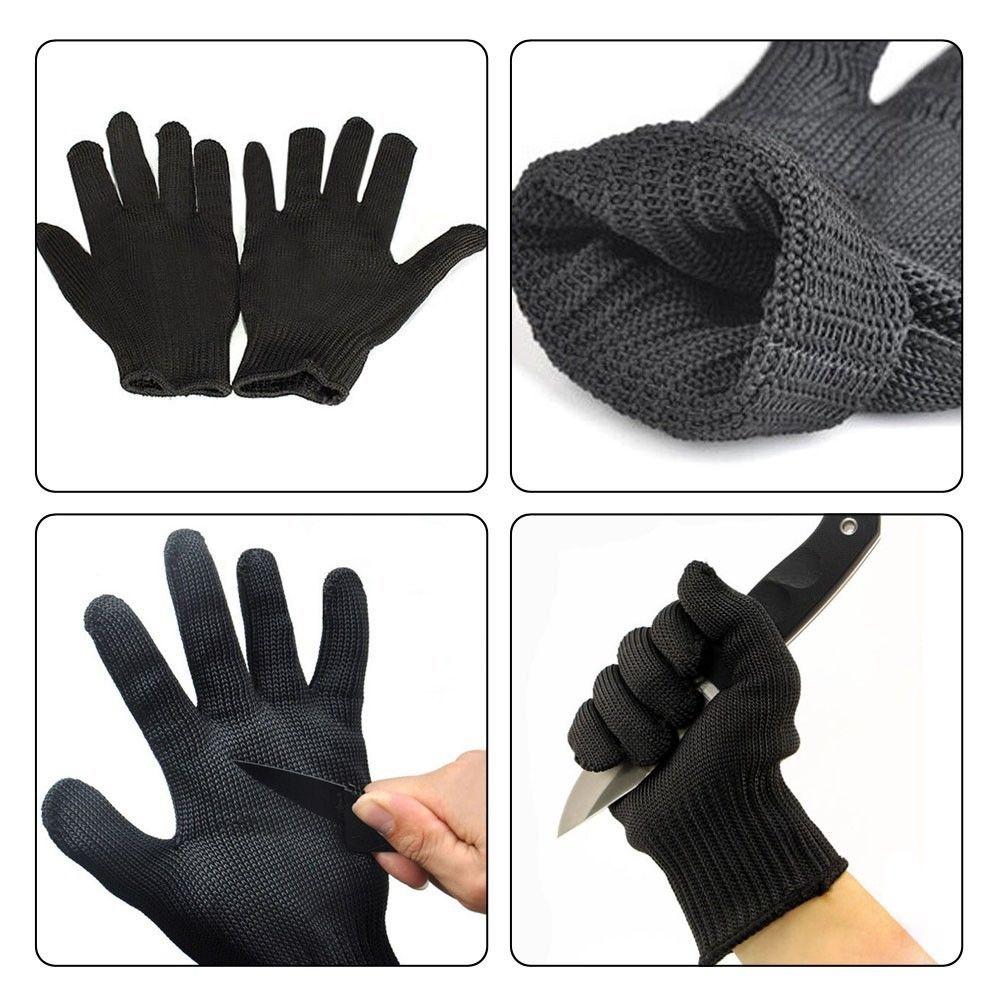 Such gloves are now spilled-raspberry, especially in Chinese online stores. From bicycle super-breathing with cushioning inserts made of foamed polyurethane and a special gel, to harsh workers' cradles who are not afraid of water, cold or splashes of hot metal. In contrast to the poured, in which the hand is sweating, it is much more comfortable to work in these gloves due to the air-permeable outer layer. The design of the cuff in the form of leggings, set on the wrist, better protects the forearm. True, the producers of the harsh workers' crags are mostly oriented towards Europe and other people of the “golden billion”, respectively, they are also trying to keep the gold price.

With theory finished, go to practice ...