Continuing the subject of automotive safety , in this article I would like to elaborate on crash tests, without which not a single more or less famous auto concern can do today. Today, there are more than a hundred different standards and safety assessment parameters, and after the first crash tests, cars were tested only for a frontal impact. Few people know that before the invention of dummies, human corpses and even experimental animals were used in tests. Now they are trying to keep silent about this fact, but they had to start with something.

How it all began

At the dawn of the birth of the auto industry, no one thought about the safety of this type of transport: people were simply stunned by the fact of the existence of high-speed self-propelled transport. And even if several people died in an accident, no one particularly attached this importance. The first recorded pedestrian death in New York dates back to 1899. By 1930, this number had risen to 15 people per 100 million miles traveled. That's when automakers start thinking about car safety checks. Then the main criterion for reliability was the strength of the body, but in fact it turned out to be completely different. The thicker the steel was used, the heavier the car became and, consequently, the blow was stronger. Only after a long time, the engineers realized that if the body of the car is not made of crumpling materials, then all the energy from the collision is transferred directly to the salon. In this case, a severe collision almost always led to deaths as a result of a pounding on the steering wheel or a fracture of the cervical vertebrae when the head was tilted back.

In order to study the behavior of the human body in a collision, the company General Motors conducts the first, officially registered crash test in history.

The test took place on a special site with artificial overlap. After him, the company revealed a number of flaws in the design of production cars and significantly refined it.

At first, crash tests were done on the street, cars were dumped off a cliff, struck against the walls, and real people were often behind the wheel. In 1930, knowledge in the field of human biomechanics was not yet at a sufficient level; therefore, plastic mannequins used at first were considered ineffective for data collection. Therefore, in the crash tests began to use human corpses. The driver and passenger seats of GM cars and other manufacturers planted the corpses of white people who died non-violently. Such a radical step immediately bore fruit. According to statistics, one corpse could save about 8 thousand human lives. The bodies of the dead people were comfortable in terms of further examination for various lacerations, bone fractures, and so on.

By 1950, the number of cars produced began to grow exponentially, and the number of deaths as a result of an accident amounted to thousands. Many car companies have decided that the use of human corpses is not the most effective method, and it’s not even the moral or moral aspect. As mentioned earlier, the tests used the bodies of people who died non-violent deaths, and these were mostly elderly people. Such tests, for example, could not demonstrate the effects of accidents on children or people of different builds. 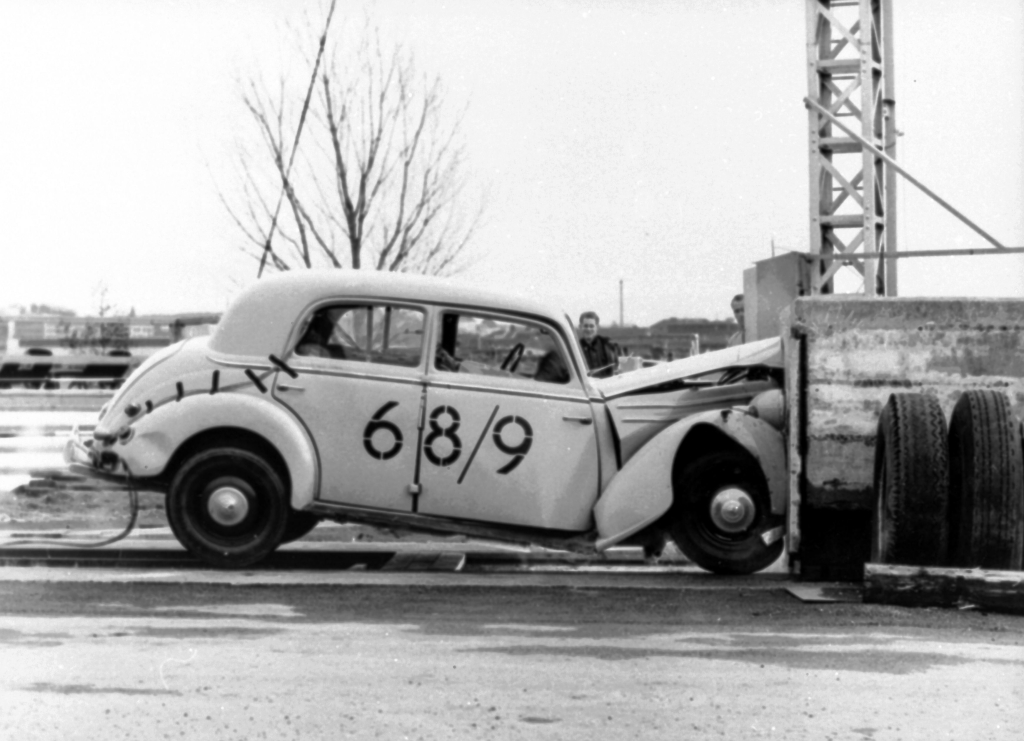 Then pigs were used as test subjects, since the structure of their body is most of all similar to that of humans. It was the pigs who made the greatest contribution to the development of passive car safety and the further creation of deformable elements of the hull, folding steering wheel, seat belts, etc. It is also known that other animals such as chimpanzees, dogs and even bears were used in crash tests. Before testing, animals were introduced into general anesthesia, and in case of severe injuries they were immediately put to sleep.

Even if the fact of using human corpses, caused strong indignation from religious organizations, the use of animals, which in most cases died, did bring many opponents to crash tests. The main critic was the ASPCA Animal Protection Society. It became obvious that we must look for other ways to implement the tests. Therefore, the engineers decided to go back to basics and continue using dummies in crash tests.

In Europe, one of the first who officially began to conduct their own tests of cars, was the Swedish Volvo . Already in the late 1950s, the company began to conduct crash tests of cars to test new security systems. Such tests were most often carried out at special sites, however, until now, cars continued to be dropped from cliffs and thrown into ravines. Thus, the classic “240” model was dropped down with a nose from a height of several tens of meters, and railroad cars were supported on the roofs of the “850” and “940”. Subsequently, testing with pressure on the roof became a mandatory parameter of crash tests of all American cars. The first Soviet car that underwent a crash test was the Moskvich-408, produced from 1964 to 1975.

Volvo's significant progress in the development of safety technologies led to the establishment of a special accident research unit of the Accident Research Team in the company in 1970. Experts from this unit traveled to the accident site and examined each individual case. At first, the Swedes studied more than 40,000 cases of accidents. In addition to the causes of accidents, specialists also searched for technical capabilities to reduce their impact.
After GM and Volvo, many automakers began crashing tests. One of the first to intercept the baton is the Japanese Subaru. Recently, the company poured archived factory test surveys into the network, dating back to 1965, during which deformation zones were tested in a frontal collision.

Also, the Japanese company was one of the first to start conducting tests to ensure the safety of passengers, and in the future created the first pedestrian dummies. It is noteworthy that until the beginning of the 1970s, no country had any rules and regulations for conducting crash tests. Automakers continued to use the corpses of people and animals in tests, and then smash them in any way possible. Moreover, the employees of the carmakers could easily go to the scene of the accident in order to study the corpses with the doctors and the police. That all changed in 1973 when the National Highway Traffic Safety Association (NHTSA) introduced its own crash test requirements. After that, American companies were forced to switch to the use of Hybrid II, but this does not mean that automakers stopped using in animal testing. It is known that Chevrolet used the last pig behind the wheel of a car in 1993, and some automakers have used human bodies in trials so far.

Until 1976, the concerns studied injuries of adults only, but in 1976 the whole family of Hybrid III dummies was immediately demonstrated, which showed damage to the bodies of all body types. In total there were seven types of dummies: the largest one is 188 cm tall and weighing 100 kg and the smallest imitating a three-year-old child. Such mannequins were very expensive - often the cost of one copy with all sensors could reach up to 100 thousand dollars and more. In general, the United States ahead of Europeans by more than 20 years in both crash test technologies and legislative regulation of this issue. And although the American specificity of the tests is similar to the European, it still has some differences. A few years ago, NHTSA published a ten-year report on 23 thousand crashes on the roof. As a result, it was concluded that increasing the stiffness of the roof reduces the risk of deaths from 57 to 39%. As a result, all American cars were tested in case of a coup. Testing was carried out by squeezing the roof of the car flat plate weighing three times more than the mass of the car. The threshold of subsidence of the roof of the body should not exceed 12 cm. Another purely American fire safety test is to hit the concrete slab in the bumper of a car moving at 50 km / h with a fuel tank filled to 93%. The car in this case should not lose more than 30 milliliters of fuel per minute. 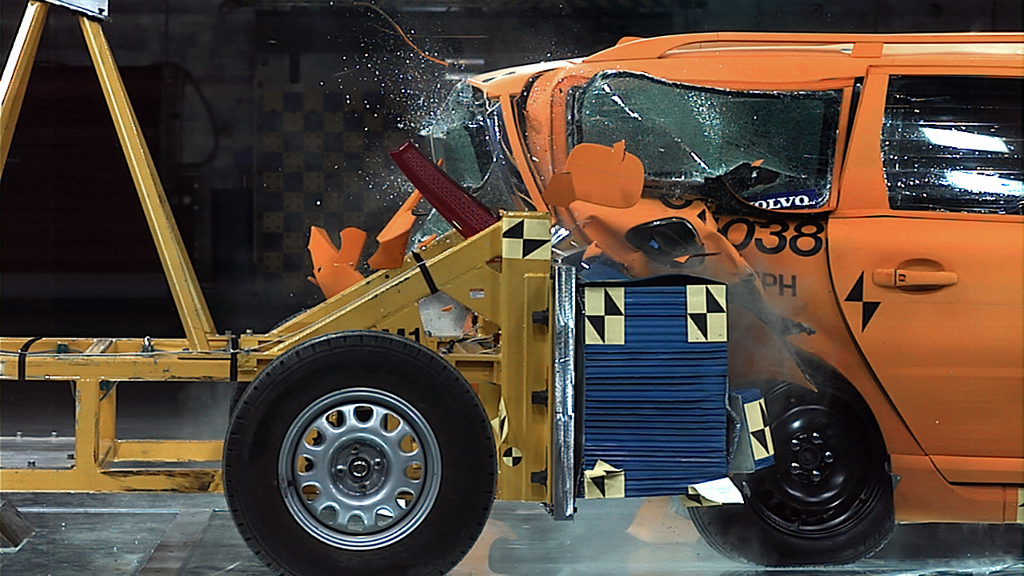 One of the latest crash tests - “a frontal hit with a 25% overlap” was introduced in 2012 by the American Institute for Highway Safety IIHS. The test consists in pushing a car with a 1.5 meter aluminum cube, which touches 25% of the front-end area on the driver’s side at a speed of 64 km / h. Prior to this, for American cars, the contact area was 40%, and for European countries, this figure remains the same.

To date, there are several organizations conducting independent crash tests. These include European Euro NCAP, American NHTSA and IIHS, Chinese C-NCAP, German ADAC, Australian ANCAP and Japanese JNCAP. All of them conduct their own types of tests according to various standards, which are created based on the results of thousands of accidents in individual areas. That is why, a car that has passed a security check in Euro NCAP, can "fill up" it, for example, in the American NHTSA. Most automakers customize cars to the requirements of individual organizations. Thus, the prevailing number of machines keep the impact well enough at 65% overlap, and hardly fit into the frame of 40%. The result of 25% can pass only a few dozen cars around the world. 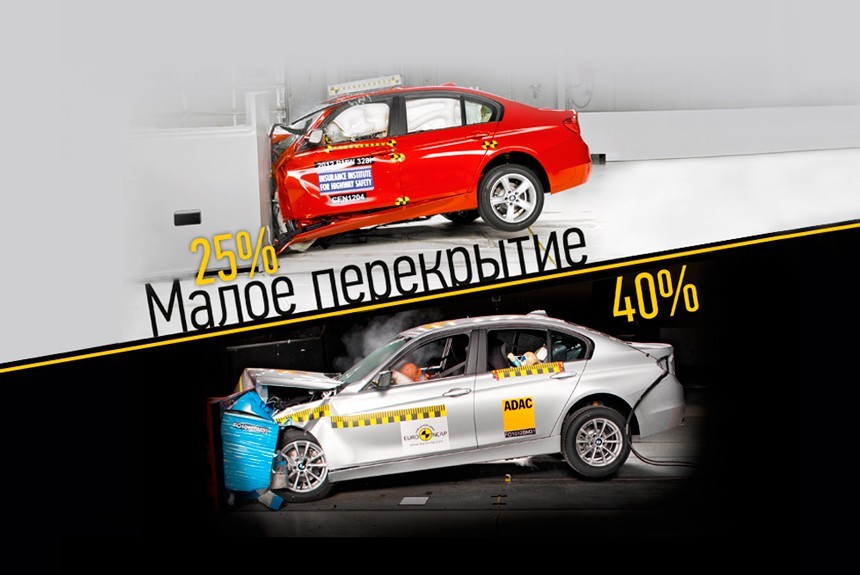 The European Euro NCAP is currently conducting three main types of crash tests: imitation of a head-on collision with 40% overlap, side impact to simulate a collision with a pole, and imitation of a whiplash when hitting behind. In addition, additional tests are being conducted to test various security systems: a vehicle coup, a test with pedestrian dummies, etc. According to European standards laid down in 1997, points are taken for damages received by the dummy. According to the total points and is determined by the degree of vehicle safety. The most demanding in terms of criteria for testing remain the Americans, who every year reduce the minimum threshold values. The most loyal to the frontal strikes, the Chinese Committee C-NCAP is a collision at a speed of 50 km / h with 100% overlap.

In the early 2000s, automakers were widely tested on the basis of computer simulation, which are much cheaper, but still not as accurate as the classic crash tests. Recently, the Daimler auto concern, together with the German Institute for the Dynamics of Fast-Flowing Processes of the Fraunhofer Society, has developed a technology that can be used to obtain X-rays of a car during a crash test. X-rays of a high-speed vehicle allowed for a detailed analysis of all deformable parts, which cannot be obtained using high-speed collision imaging.

Recently, NHTSA conducted a comprehensive crash test of the new Tesla Model X. According to the test results, the Model X became the first crossover to receive the maximum rating in all categories. You can also read about other events and innovations in the automotive world in our news blog .

In addition, below are some interesting crash tests:


Can you drift an American school bus?


The device for controlled coups