European shuttle, parachute for satellites and bacteria from space on the ISS upholstery

The ESA has ordered the development of a reusable shuttle for space experiments. Europeans want to be more independent in space and at the same time save money. A new, unmanned shuttle called Space Rider will be launched on a Vega rocket and be in space for up to two months. Only the front of the ship will return to the ground. The shuttle will be able to make up to 6 flights and carry a load of up to 800kg. The planned cost of one launch is 40 million euros. They are going to conduct scientific experiments and test new technologies on board. According to the ESA, the pharmaceutical industry is already interested in conducting experiments. The first flight is scheduled for 2021. The European Space Agency ESA also expressed interest in the further development of the carrier rocket itself. Vettore Europeo di Generazione Avanzata, abbreviated Vega, has been developed since 1998 and is used to launch low-cost satellites weighing up to 2 tons in polar circular low orbits. “The modernization of Vega, for which Avio companies allocated 53 million euros, suggests a further rejection of the used Ukrainian RD-843 engine running on heptyl and nitrogen tetroxide,” writes Lenta.ru 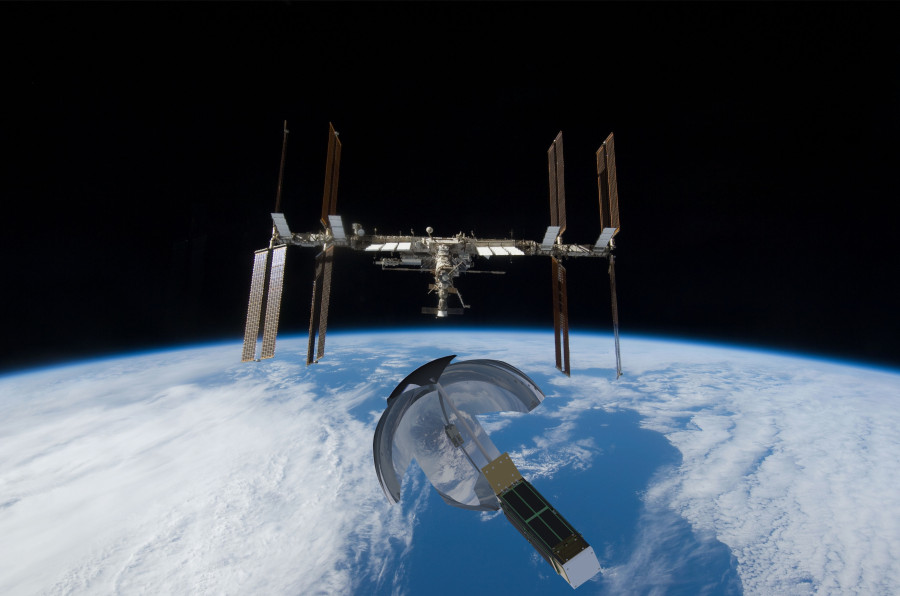 At the University of Idaho and the University of San Jose, in conjunction with NASA, they are developing a system that allows controlled small satellites from orbit to be returned and the results of experiments to be returned to Earth. The 3.5-pound Technology Educational Satellite uses a system of mechanical struts and flexible cords for controlled braking against the upper atmosphere.

The video shows the moment of disclosure of Exo-Brake.

Russian scientists (again) found on the ISS paneling bacteria that arrived from space.

In an interview, the cosmonaut Anton Shkaplerov told about living organisms found on the outer side of the ISS skin. During space exits, samples are taken from the outer surface of the station and delivered to Earth for analysis. “And now it turned out that from somewhere on these tampons there were bacteria that were not there when the MKS module was launched. That is, they came from space from space and settled on the outer side of the skin. While they are being studied, and it seems that they do not carry any danger, ”said the astronaut. It is worth noting that in 2015 there was already similar news. At that time, DNA was found that contained quite terrestrial bacteria that inhabit the surface film of the Barents and Kara seas. They could only reach the height of the ISS orbit using a global electrical circuit. An electric current constantly flows between the surface of the Earth and the ionosphere. It turns out the earth constantly infects space with its life.