In the beginning I will give this most difficult crossword puzzle: 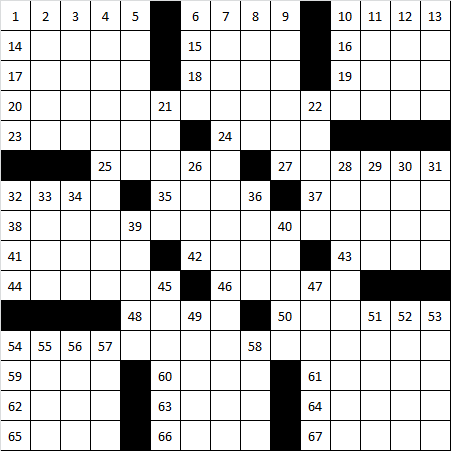 The first thing to find is a list of words that are used in the construction of this crossword. Two files from the above articles were taken as such a list - one file with Russian words, one file with English. Then it was necessary to solve the main question - what algorithm to use to compile this crossword. Actually “difficult” this crossword does not the number of words, but the number of their intersections. It is clear that the brute-force attack is not suitable here, since the enumeration of all the options would take too much time. In the aforementioned article, many heuristics were considered to speed up the brute force process; however, this crossword was never written in Russian or in English. You can continue to come up with other heuristics to speed up the solution, but most of them have already been invented and implemented in the SAT solvers. Therefore, it is possible to translate the task into a form understandable by the SAT solvers and use one of them.

What is a SAT solver and what information it expects at the entrance I considered in the article “Solving the Tile Problem with the SAT Solver Using the Example of Pentamino” . In the case of generating a crossword puzzle, a slightly different approach is needed to formulate the problem in conjunctive-normal form, which I will now state.

Now we will make a formula describing our task, that is, we will actually impose restrictions on our variables. Find all vertical word crossings with words horizontally. For each intersection, we determine which pairs of words are combined with each other and which are not. However, a problem arises here, since the number of such pairs may exceed one million for one intersection. Therefore, we use a different approach. Sort the words in the group that corresponds to the word horizontally by the letter that stands in the position of the intersection of these two words. Do the same for the word vertically. Obviously, the appropriate words will have the same letter at the intersection. We introduce an additional variable for each letter that occurs at least in one word horizontally and vertically. Now the condition that the two words are combined with each other will be that at least one such variable will be true. Thus, for each intersection, one clause consisting of variables corresponding to letters will be added. Now it is necessary to associate variables corresponding to a specific letter with words containing this letter in the position of the intersection of words. This is done by a set of clauses that ensure that two boolean variables have the same values. And finally, it is necessary to ensure that there are no identical words in the crossword. To do this, for each word from the database we add clauses of the form (not x_i V not x_j), where x_i is the variable corresponding to its instance in one word from the crossword puzzle grid, and x_j is the variable corresponding to its instance in another word from the crossword puzzle grid.

After that, I tried other crossword grids. For example, I managed to make a crossword of English and Russian words in the form of a square 6 by 6, where all the words intersect.
Next, I bring the resulting crossword puzzles. Those interested can solve them.

The use of SAT Solver raises the complexity of crossword puzzles that can be generated. As in the previous article, I want to set the next unconquered peak - to make a crossword puzzle of Russian or English words in the form of a square 7 by 7. Who will take the challenge?