The year 2018 has begun. Time to take stock of 2017 and traditionally recall the most important events of the space industry, the ups and downs of public and private companies, the topics that we discussed with you at Geektimes during this busy year. In the first part, we will talk about the International Space Station, space launches into Earth orbit, and about the achievements and prospects that private space opens up.

Continued:
Part 2: flights to the moon, mars and venus One of the most important events on the International Space Station in 2016 was the deployment of the BEAM inflatable module from Bigelow Aerospace. In 2017, he was one year old . During this time, it was possible to test its strength and ability to withstand collisions with particles of space debris - the test was successful: the debris fell into it, but no damage was found. Now NASA will figure out how much better or worse this module is coping with cosmic radiation. The life of BEAM at the station was extended until 2020. SpaceX seizes the heavy traffic market on the ISS. Over the years, in addition to the giants of the level of Lockheed Martin and Boeing, a new self-sufficient American aerospace company has emerged, partly reared by contracts for the delivery of cargo for NASA. The Dragon cargo ship became the first ship in history to be sent again to the station after returning to Earth, and which then again successfully splashed down .

On June 5, a space truck delivered 2,700 kg of supplies, equipment and experiments to the station. These were important materials for scientific and research experiments , including fruit flies, to study the effects of long-term space flight on the cardiovascular system and new solar batteries for testing. And for the Russian segment of the ISS an important step for will be to simplify the conduct of experiments . To this end, Roskosmos and the Russian Academy of Sciences are planning to change the current GOST for conducting experiments in order to provide access for organizations unrelated to the rocket and space industry. The changes will affect the bureaucratic component and the requirements for scientific equipment.

“We have a short program of scientific experiments for the second year in a row. Most of the experiments that continue for several years. A lot of contracts stopped because of the most severe control of military acceptance. A lot of equipment is stuck, ”- this is how the news was commented on to“ Izvestia ”by a source in the rocket and space industry. In October 2017, a NASA representative told about the partial depressurization of the Soyuz MS-02 with three astronauts on board, which occurred in April. This information was confirmed in Roscosmos. The ship received damage due to mechanical damage to the part of the parachute system. The danger for astronauts was minimal , and Roskosmos had already taken on the task of eliminating the possibility of a repetition of such a situation.

The question of why Roskosmos in April did not pay special attention to this situation was discussed - information about it in the media came from overseas. The fact is that various abnormal situations occur almost constantly. Astronautics is a very dangerous occupation. Therefore, to pay special attention to depressurization, which occurred at a height where it was no longer dangerous, did not. Mechanical damage happened because of the details of the parachute system - that is, at a higher altitude, where it would be fatal for astronauts, such damage would not have happened. Once again, the "Science" module did not go to the International Space Station. In 2013, the assembled module was prepared for launch, but it did not pass testing - metal chips were found in the pipelines. Then in 2017, pollution was found in the tanks. In June, it became known that the launch of "no doubt" will be held in 2018. But it is not exactly. Read a detailed analysis of this sad story, which showed that the level of technology, once achieved, can be forgotten and rolled back. In a report published on December 5, 2017, the results of a study on living organisms on the International Space Station were presented . It turned out that there are at least 1000 different types of microbes on it, but there may be four times as many of them. Researchers believe that such a number of microorganisms is an indicator of a “healthy spacecraft.” In 2018, the number of Russian cosmonauts at the station will again be increased to three people. It was reduced in 2016 to reduce station maintenance costs. The first start from the Vostochny cosmodrome was successful . From the second attempt, on April 28, 2016, the Soyuz-2.1a launch vehicle launched the Aist-2D spacecraft, the Mikhailo Lomonosov MSU scientific satellite and the SamSat-218D nanosatellite, into orbit. “They say that in order to confirm the quality of the pudding, it is necessary to eat it, in order to confirm the readiness of the cosmodrome for work, you need to make the first launch. You did it, congratulations, ”Vladimir Putin commented on the event. 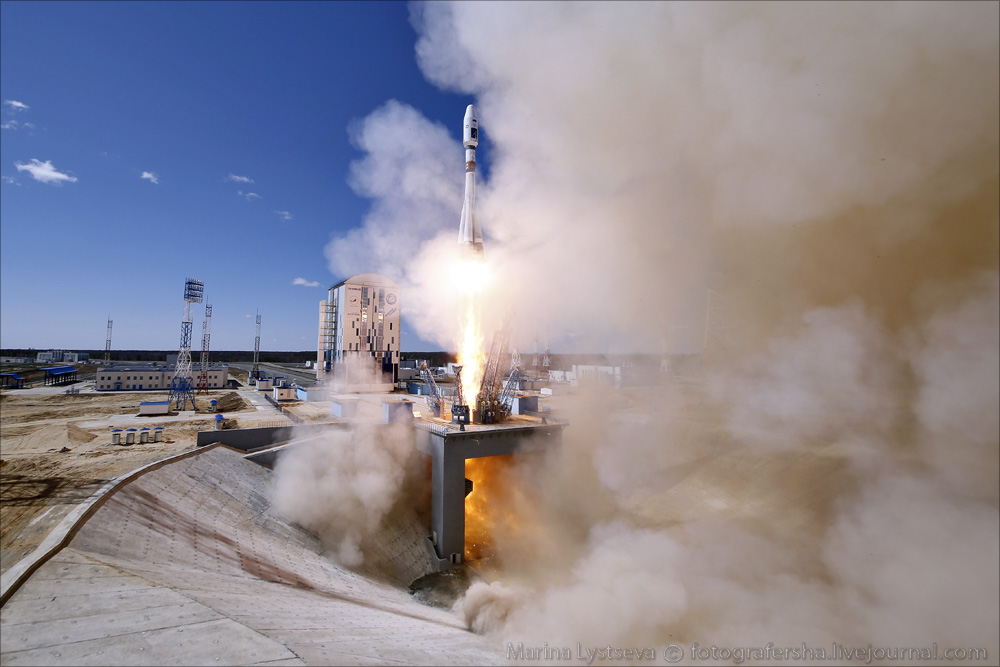 On November 28, 2017, the Soyuz-2.1b launch vehicle with the Fregat upper stage was launched from the Vostochny cosmodrome. The rocket was supposed to launch into the sun-synchronous orbit of the spacecraft Meteor-M No. 2-1 and eighteen satellites of associated load, including the Baumanets-2 apparatus and commercial satellites, nanosatellites from Russia, Germany, Sweden, the USA, Japan and Canada.

The rocket together with the satellites as a result of an emergency situation fell to the Earth and sank in the Atlantic Ocean. Many versions have been put forward, why the launch failed. The error that led to the incident is treated by software: the upper stage began to spin in the wrong direction when the ship was brought into orbit. Mayak became the first Russian satellite created by the hands of enthusiasts and launched into orbit. Work on the satellite began in 2016. In June 2017, it was integrated into the flight transport and launch container at the Baikonur cosmodrome, and on July 14 it was launched into orbit, but was lost . Read about events in chronological order and the final report on the project . 2017 can be safely called the “Year of Private Space”, in many respects thanks to SpaceX, which overtook not only any organization by the number of launches, but also any country. At the same time, the company managed not only to plant several steps, but also to plant already reused steps after launches. And two start-ups and landings took place over two days off . The launches of the private company SpaceX have already ceased to be something unusual, they have become almost a routine.

In March, SpaceX for the first time planted the previously used first stage of the Falcon 9 launch vehicle . It was a full-fledged commercial launch of a rocket with an expensive cargo on board - a communications satellite was launched into the orbit of the planet. Then the step sat on a floating platform. It is planned that in the future such steps will be used up to 10 times.

In June 2017, Ilon Musk wrote on Twitter that the difference between the cost of launching SpaceX and Boeing / Lockheed could be a satellite. Read what the space launch market looks like now, what rockets are and how much they cost. Ilona Mask has few flights to orbit, he continues to move toward his goal - a controlled flight to Mars. To do this, SpaceX developed the Falcon Heavy rocket, began testing it , and in 2018 Musk already wants to send his own Tesla Roadster with Space Oddity in the cabin on this rocket towards Mars.

Mask presented a rocket for flights on the Earth : "To any point on Earth - in less than an hour." For example, the journey from Los Angeles to New York will take 25 minutes, from New York to Paris half an hour, and from Sydney to Zurich 50 minutes. The private space company Rocket Lab made the first launch of the Electron launch vehicle in May 2017. A distinctive feature of this rocket - materials and fuel supply system. The details of its engine are printed on a 3D printer, the rocket is widely used light and durable composite materials, and the fuel is supplied using electric motors.

Another very unusual factor worth noting is that Rocket Lab built the world's first private spaceport to launch its missiles.

The launch was partially successful - the rocket failed to go into orbit and fell back into the atmosphere. The investigation showed that the problem was in one mistakenly turned off toggle switch , due to which the rocket failed to communicate, and according to the rules it had to be undermined.

Microsoft co-founder Paul Allen in 2011 opened Vulcan Aerospace, where he began developing the giant Stratolaunch aircraft for launching rockets into space. The plane is really gigantic, the comparison can be seen in the infographic below: its wingspan is longer than the length of the International Space Station. The wing span of the Stratolaunch is 117 meters - it exceeds the wingspan of the Hughes H-4 Hercules aircraft, which with its 98 meters held this record for 70 years, as well as the 88-meter An-255 Mriya, designed to lift the reusable Buran.

As in the case of the re-landing of the first stage of the rocket, this aircraft was created to reduce the cost of space launches. The first mission of the aircraft will be the rise into the stratosphere of the Pegasus XL launch vehicle. The aircraft is designed for the simultaneous launch of three such missiles - up to 250 tons of payload. At one time, suborbital tourism seemed fantastic, then as a result of the Ansari X Prize technology competition, SpaceShip One appeared - a private, reusable suborbital manned spacecraft, and this trend became a reality. But unsuccessful launches pushed aside this dream, and it took several years to talk about it again.

Today , Blue Origin with New Shepard and Virgin Galactic with SpaceShipTwo are leaders in this area. Read about those who have tried to explore the private space since the 1970s .