Stop enduring heat in the apartments

Preface:
I was inspired to write this publication, which has become a cult article "Stop Twisting . " Twists are a scourge of modern times, which, despite the fact that they were banned long ago, are still widely used by electricians, especially electricians from the housing department. Since I am a member of the board in several HOAs, I have a lot of contact with the working class representatives serving our apartment buildings. And if in electrics a scourge is twisting, then in plumbing, such a scourge is polypropylene pipes! But first things first.

The last few weeks, many residents of our vast Motherland have died from the heat. During the day it is warm outside, and the heating has not been turned off. Common situation? It is impossible to sleep, nothing to breathe, the air is dry. Not only is this the biggest expense item in utility bills, but at the same time we are forced to live in unsanitary conditions when the air temperature in apartments reaches 30 degrees of heat. According to the standards of SanPiN 2.1.2.2645-10, the maximum temperature in living rooms should not exceed 24 degrees:

Everything above is unsanitary living conditions. But unfortunately, exactly in such conditions lives a huge part of the population of our country, especially during the off-season, when it is already warm outside, and the heating system has not yet been turned off. And yes, I repeat, we all pay for this heat from our own pocket. This, of course, is about houses connected to the central heating system.

In fact, such a heat has a quite logical technical rationale, and in most cases there is nothing to blame the heat suppliers for. With rare exceptions, our houses are not equipped with a weather-dependent automation system and there is no technical possibility to adjust the temperature in the off-season. Thermal technicians cannot supply a cooler coolant, since the same coolant heats hot water, and according to standards it cannot be lower than 60 degrees. As a result, we have inadequate heat in the apartments.

So what to do? The installation of weather-dependent automation is necessary, but it requires a lot of money and the consent of the residents of the house, since the heat node is a common house collective property.

And what can you do in your apartment? How to get rid of this unbearable heat? The easiest option is to roll up all the insulation, for example, polyethylene foam with a reflective coating. Option, simple, proven, and fundamentally incorrect. 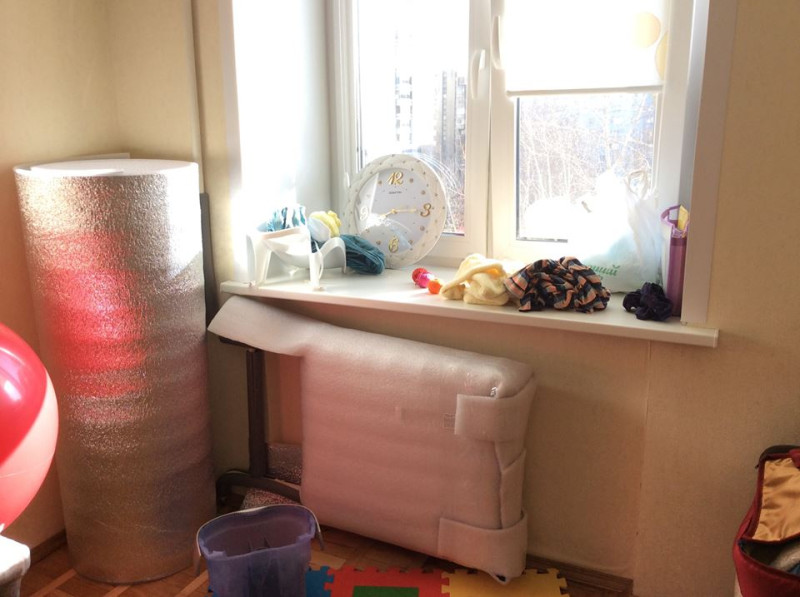 The correct option is to invite plumbers and embed taps to adjust or cut off the battery. As a result, this event will allow you not only to save your home from unsanitary conditions, but also in the event of a battery leakage, it is possible to quickly shut off everything and thus save the repair to yourself and to your neighbors from below. But there is one, but a very large pitfall. Most plumbers to whom I addressed offer to solve the problem like this: 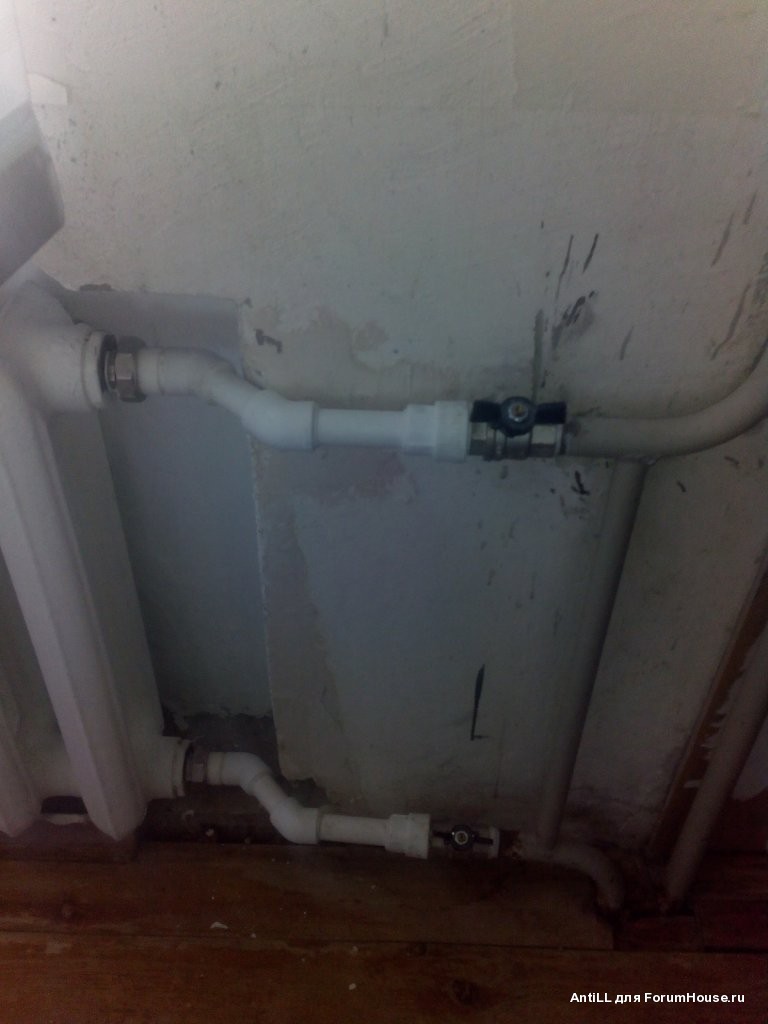 The pipe is cut, then the ball valves are installed, and then the polypropylene pipe (the white plastic pipe after the crane) is connected to the battery. For plumbers, such a way to solve problems is the easiest and fastest, but for you this solution may pose a threat to life (I'm not joking!). Let us analyze this scheme in order.

First, any house has a project for engineering communications. And any deviation from this project is a reconstruction, and should be properly decorated. Written in the project, the heating system is made of metal pipes, so there should be no plastic pipes in the heating system! By law, any such alteration can be considered illegal and obliged to return everything to its original form.

Secondly, each heating battery must be connected to the system of equalizing the potential of the house, or in the common people, grounded. Obviously, when you tear off the risers and radiators with a piece of plastic pipe, you cannot talk about grounding. This not only can deprive a person of life when the phase gets on the heating battery, but also due to electrochemical corrosion, it may well age the battery ahead of time.

Thirdly, and much more important, ANY polypropylene pipe is not intended for use on central heating ! This is confirmed by all responsible pipe manufacturers. The fact is that in severe frosts according to the temperature schedule, the heat supply organization has every right to submit a coolant with a temperature of 130 degrees! And manufacturers guarantee a stable operation maximum at a temperature of 90 degrees and a pressure of 4 atmospheres, and the service life of pipes under such operating conditions is only a few years! Last year, in extreme cold, I recorded 106 degrees in my batteries. To be fair, it should be noted that this mode of operation is emergency, but we lived in this mode for several years! A neighbor put dry boots on the battery, they melted! And now let's imagine what will happen to the polypropylene pipe at this temperature - after several years of operation, it will simply burst, boiling water will flood your apartment under strong pressure, and if you have time to find a way out of the apartment in a pair of clubs, consider you have a second birthday. There is enough evidence on the Internet of deaths and burns as a result of the breakthrough of such pipes in extreme cold. Do you need it?

Another blunder is ball valves. I was surprised, but for many plumbers, it turned out to be a discovery that the ball valves are not really designed to regulate the temperature of the battery. Ball valves have only two positions - “ON” and “OFF” - everything! If you try to regulate the temperature of the battery with a ball valve, then with a high degree of probability the ball valve will fail, and simply simply cease to hold. All manufacturers declare this.

So how do you do it right?

You just need to comply with the project at home! Put metal pipes on welding - invite a welder and weld pipes. For me, it was a surprise, but the difference in money in work was almost nonexistent! Welders of polypropylene pipes take a little cheaper for welding work than classical welders, but the cost of high-quality polypropylene pipes, and especially fittings for them, is much higher than similar metal ones. In addition, if, nevertheless, the metal pipe leaks, then unlike polypropylene, it will warn you with a thin trickle from the fistula, when the polypropylene pipe just bursts and fills everything at once.

Well, how to regulate the temperature of the radiators if you do not want to shut it down completely, but you only want to lower the temperature a little? To solve this problem, there is the so-called control valves: valve taps (manual control) and thermostatic valves (automatic control). They cost a little more expensive than ball valves, but for some reason they will allow you to enjoy a comfortable temperature in the apartment, while still massively using this, it will also have a tangible effect on the price of heating, which I personally consider as self-sustainability. 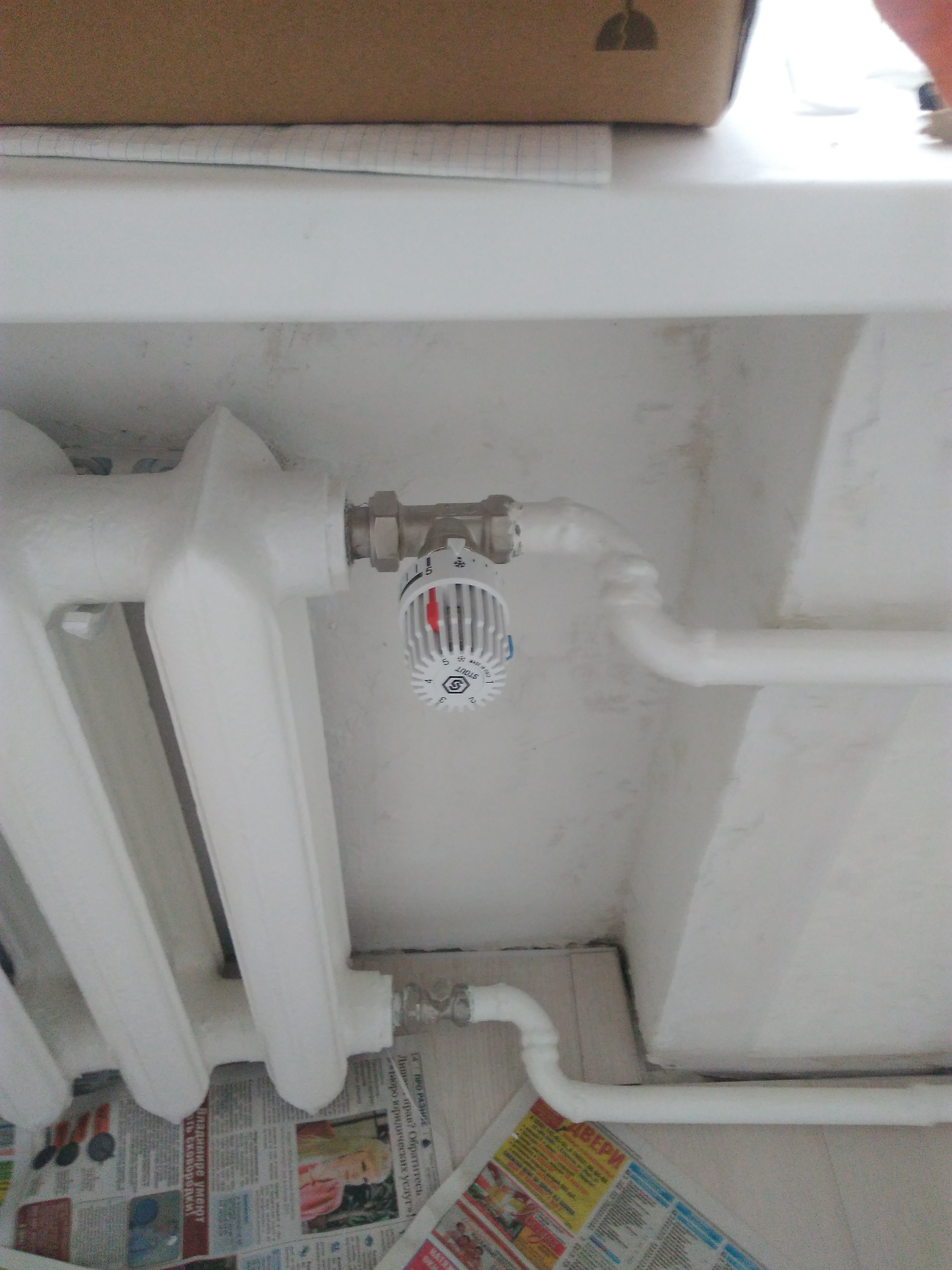 It is believed that thermostatic valves, as in the photo above, can not be used with cast iron batteries or on central heating, which uses a rather dirty coolant. This view did not appear from scratch.

The fact is that the cast-iron battery is very inert, and keeps heat for a long time. Therefore, if, for example, during the day the sun heated the flat, the thermostatic valve pressed the flow of coolant, the cast iron battery can cool down only after a couple of hours, when evening comes and you need to raise the temperature again. This effect in theory is the place to be, but in practice I personally have not been noticed. Although by the way, I have half the batteries in the apartment off all winter - too hot. As far as thermostatic valves are concerned, it is necessary to remove the thermal heads for the summer, then the valve will not be clogged - as practice shows, those who do this use automatic thermostatic valves for many years without any problems. But if you are worried, it is easier to put the valve, for example, the company FAR. This is a 100% proven and reliable system, but will require you to manually control the temperature. What in general is also not very uncomfortable, since, again from practice, this procedure is infrequent.

These are simple events to spend once in your life in your apartment, and you forget about dry air, intolerable heat, become less sick, and in the long run, when everyone starts to perform such events massively, you will save a lot of money. Saved - count earned.

Updated on 08/05/2018 17:52
In the comments write that such a high temperature can not come into the house, and my house is somewhere in the far north. My house is in Vladimir, and I was not even too lazy to go to the chairman of the HOA and took two photos.
Here is a schedule for the supply of heat to the house, depending on the temperature outside. As we see, already starting from -14 degrees of temperature in the street 100 degrees of heat come to the house. I remind you that polypropylene can be used up to a maximum of 90 degrees. Yes, it can be argued that the temperature drops in the mixing node of the elevator, but no one is insured against accidents in the heating unit. And even more often it happens that the plumbing gets tired of complaints about the cold in the apartments, and he removes the elevator nozzle - all the heat goes into the house. Well, the metering station of commercial energy is designed according to the technical conditions from the calculation for the maximum temperature of 130 degrees. So, theoretically, so much can come to the radiator in severe frosts. Well, the pressure, of course, is also not designed for polypropylene. PS: Show this article to your plumber. If he says that I don’t understand anything, he has ball valves on many objects and people calmly regulate the temperature, and polypropylene has been used in every house for 10 years now, my advice to you is to refuse the services of such a master. Frequent tragedies that take away the lives of children as a result of negligence and carelessness are not worth the imaginary economy.

PSS: When installing control valves on a heating battery in an apartment building, you must be sure that you do not block the so-called bypass or jumper. Otherwise, your neighbors' batteries will become cold, they will quickly write a complaint to the Criminal Code and you will receive a cap. In the photo above (with a thermostatic valve) the bypass is not visible, but it is there, just did not fit into the frame.