The Industrial Museum in Bad Kösen, Germany, is a small factory of the 18th century for pumping mineralized water from the depths for the subsequent extraction of salt from it. Energy is produced by a water wheel on the river, salt water is pumped out of the pump and supplied to the cooling tower.

The most beautiful here is the operating device for the transfer of mechanical energy from the water wheel to the pump. The reciprocating motion of the wooden rods on the swinging supports transmit the generated power to a distance of 175 meters: In the background there is a cooling tower, in the front there are swinging supports of a wooden power transmission line.

In the video support swing since 1:10


The mechanical energy transmission lines of Stangenkunst (in German) or Flatrod (in English) have their history since the 16th century.

They were used primarily for pumping water from mines, as well as for lifting and grinding ore, lifting and lowering people, and ventilation.

Stangenkunst'y could change direction (go around an obstacle or go first up the slope, and then down), and in especially extreme cases reached a length of 4 kilometers.

Part of the system of 140 dams, 600 kilometers of canals and 200 water wheels for servicing mines in the Harz Mountains, Germany. In the lower right corner is our Stangenkunst: 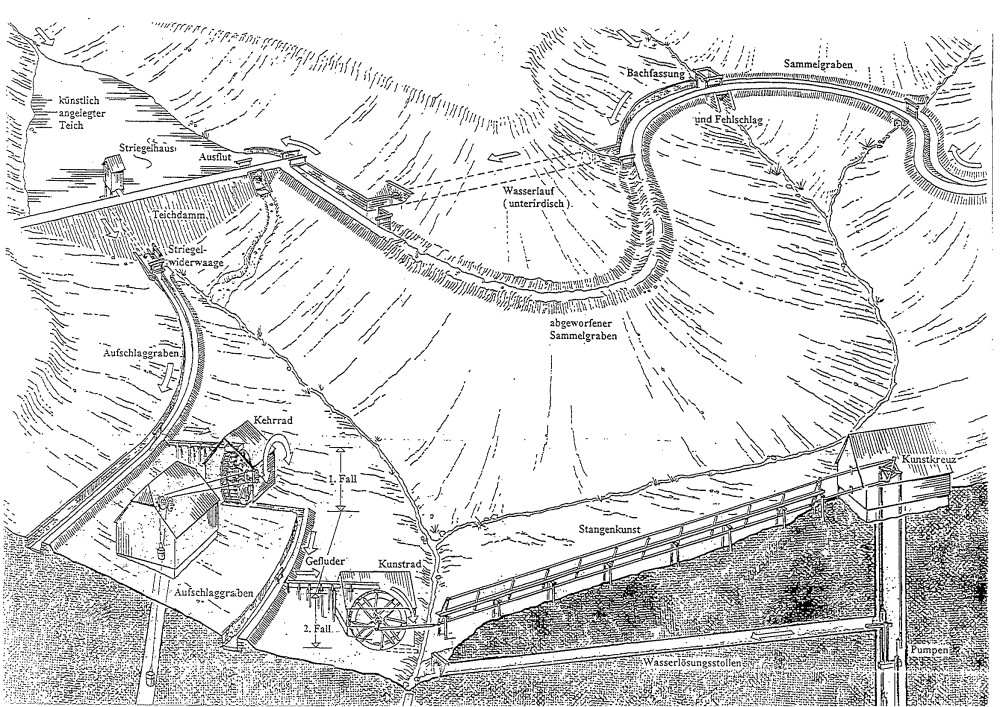 The 19th century Advanced Flatrod of one of the largest water wheels on the British Isle of Man: Here the rods are fixed on rollers, which roll on rails and transmit power of about 150 hp. 200 m away Special devices made it possible to parallelize the operation of one engine on, for example, several pumps. This is in Canada (to all appearances, the system is working and used as intended): The development of the theme is the American system Jerker line, widely used in the oil fields. Here everything is on ropes: She is in action:


In the second half of the 20th century, the described mechanisms almost disappeared from widespread use, but in some places they remained in the museum and even in practical application. For those who want to dive into the subject: